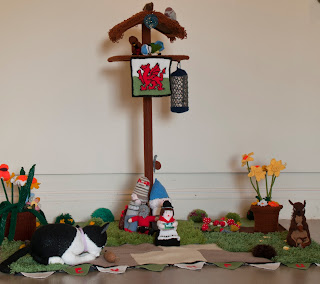 Wherever the knitted garden is exhibited the local knitting and craft groups make work to add to it.


Here is the Welsh addition- many thanks!!      It is wonderful.


The bird table garden is the creation of the ‘Popeth Cymraeg: Chelf a Chrefftau’ group (translated as ‘Everything Welsh: Arts and Crafts’.  The group incorporates learning the Welsh language through creative activities. Here is picture of the group with their leader, Haf Parry, sat in the centre in pink.  Haf runs a farming business but is also involved in various creative and musical groups. This picture was taken on the day the group installed the piece and were filmed doing so by Cwmni Da for S4C’s ‘Byw yn yr Ardd’ (Living in the Garden); in the centre back of the picture is Russell Jones, one of the programme’s presenters who’s a keen promoter of gardening and living from the land as well as being a gifted knitter.  He created a little bird made from the wool of an alpaca called Humphrey, which is now part of the ‘bird table garden’.  He’s well-known for his trade-make hat and if you look carefully, there’s a little knitted ‘Russell’ in the bird table garden.  Everyone in the group played a part in the making of the garden but the biggest contribution was one lady who worked tirelessly and roped in her family to pull the whole thing together in time.  She’s also the one who made all the witty little additions such as the mini Russell and mini Morrigan and was determined to make sure that the garden had lots of Welsh references in preparation for its ongoing tour.